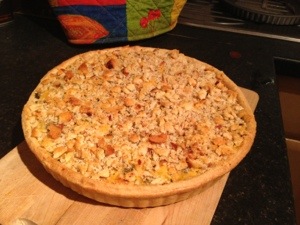 Prep time: 60 mins
Before we start I have to put my hands up and say that this is not a traditionally accurate homity pie recipe. A true homity pie recipe would have wholemeal flour (which half of my kids don’t really like) and you would never find Le Roule cheese in a traditional homity pie, no sir…however, as with many of recipe’s we end up making, my homity pie recipe is a concoction of ingredients that I happen to have in the house at the time. Le roule and cream cheese found their way into the homity pie because I didn’t have much garlic and no creme fraiche at all! The important thing was that ended up with a great meal that all of the family actually ate.

For those that are interested the original homity pie recipe dates back to the 2nd World War where meat was scarce and everything else was rationed, it then underwent a rebirth thanks to the vegetarian restaurant Cranks in the 60’s. Homity pie is a traditional British, open-topped veggie pie mainly consisting of onion, leek and potato. I hope you enjoy my recipe!

For the homity pie recipe filling:

The topping for homity pie

As if this wasn’t enough for you (or if it’s too much!) I’ve managed to find a video that I’m pretty sure follows the traditional recipe using very few ingredients:-